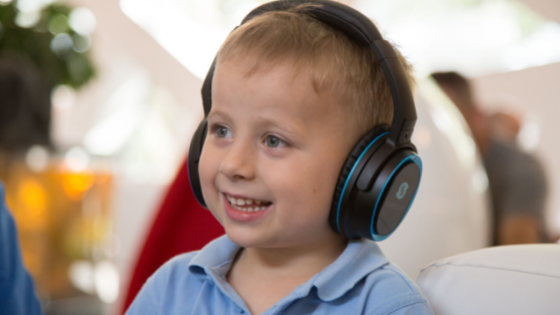 This review is long overdue but it is so important that I share it in the hope that it might help others in taking a chance on this phenomenal device.

My little boy is my angel.  Good days, bad days, when he’s driven me to distraction or when he’s been the sweetest thing. Unfortunately, it was commonplace for most days to be littered with challenges and it is hard not to lose your cool and be the mum you want to be all the time… the mum that all kids deserve.

He was an easy baby until just before he turned one. Not a particularly smiley baby but he knew what he wanted. Then about a week before his first birthday he had a particularly rough time with a cold, an stomach upset and a chest infection. All this at a time when he was teething too.  This continued for about 6 months. During that time, he didn’t want his daddy, or his sister and would cry or push away. As his language skills were poor at that age, he would bite or head butt or smack. This unfortunately did not stop once he was well. As he got a little older, he would tell others that he didn’t want them which he demonstrated vehemently. This continued till the time he turned three.

He had started to bang his head not only against mine or his dad’s chest but also the bed or the cushions. This often took place out of the blue. He would fight travelling in the car to nursery and cry when we arrived and I had to leave. We had good days (days he wasn’t too difficult) and occasional great days (where he would be easy going nearly all day). But most days anything could send him into a spiral of frustration and we tried every strategy in the book to deal with these to no avail.

He improved a little when he turned three and a little more at four but we all walked on egg shells waiting or something to set him off and invariably it did.

His dad and I would often discuss whether he had Aspergers or Autism and I spent many an hour looking online at any signs of the two. There were many signs that he did exhibit but some that he didn’t. Although his preschool teacher felt it was too early to tell, they acknowledged that he was very fidgety and struggled to follow simple instructions. He got distracted much more than others of that age.

And so, 2020 arrived…the year of the COVID19 pandemic. In the UK, the government enforced a lockdown from the end of March 2020 and the nurseries and schools closed along with our business. I busied myself trying to create preschool activities for him and basically was with him all day every day. He struggled with the lack of preschool routine and try as I might, the routine I created just seemed to frustrate him more and more. It was then that I found Soundsory.

After two weeks of using Soundsory, I noticed subtle changes – my son wouldn’t get quite as worked up if something happened that he didn’t like and he would let other members in the family help calm him. He stopped telling me that he didn’t want me or like me after I’d done something “wrong” or just for no reason. He needed to be encouraged to listen every day and there was a lot of bribery going on but I figured it would be worth it!

Fast forward a couple of weeks, I really noticed an improvement in his focus with his nursery activities. He started listening to stories all the way through without having his attention wander. We had a Zoom call with his teacher and the rest of the class and he was able to sit and talk to her about what he’d been doing.

That was a big step for him and Soundsory helped him achieve that!"

After the course finished, we left it for a few weeks, but his progress continued. It was strange because I stopped noticing it but gradually I realized I hadn’t had to fight him go to school or get in the car. When I started to look back at how he had changed over six months, it was a huge accomplishment. He is now laidback 80-90% of the time and when he isn’t, he listens and talks about why he is cross. As this happens less frequently than before, we are so much calmer and better able to deal with it.

He still has his moments but broadly the amount of stress at home is so much less and he is now really close to all of us.  Don’t get me wrong, kids change as they grow up but I genuinely believe that Soundsory was the catalyst in helping our lovely little boy quiet some of the chaos he was feeling and struggling to deal with.

Thank you for creating Soundsory. I am so pleased I took a chance on this and hope other parents find some inspiration from our story!