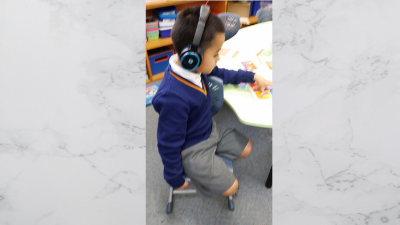 I chose to use Soundsory because of all the research which describes the positive effects of classical music on the brain. I had feedback from a client who found Soundory very calming with their child, who wore grommets and whose behavior had deteriorated. A colleague also described calming effects on children she worked with so I decided to try it within my class of five year olds.

In my class many children are constantly on the move which affects their ability to pay attention and complete tasks. Soundsory is an amazing calming tool which is easy to use in a busy classroom and allows the child to participate in the same activities as other children. The child in the photo has only used Soundsory for 14 days but has made amazing changes. He now asks permission to leave the classroom instead of running out, he stays on task for longer and is keen to write letters and words independently, he takes pride in forming letters correctly and when sitting in a class group he stays still and focuses on the teacher. He now reminds me to put on his headphones and is also happier and more confident in his abilities.

I would recommend Soundsory to families with children who show signs of attention deficits and/ or learning delays as it calms young children, increases attention and encourages self-motivated learning.