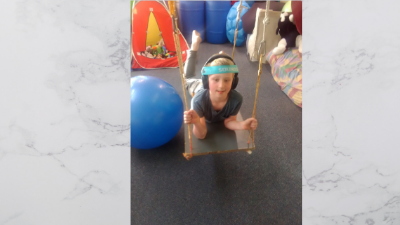 I have been using the Soundsory for just over a year in my Occupational Therapy practise. I have found it simple to use as the programme automatically moves to the next day’s music when the 30 minutes are completed. I actually completed the full programme myself and found personally l slept really well and felt really relaxed and content during the day.

I like that as well as the built in music programme the head phones are also noise reduction headphones. I have used the Bluetooth feature to help children get used to wearing the headphones while listening to familiar music, this worked really well for a young boy who is autistic and nonverbal. He was able to keep the headphones on and once his own music finished, we switched to the Soundsory music and he listened for the full 30 minutes. He then went on to do the whole programme at home with no difficulty.

I have mainly used the Soundsory with children and adults with autism, for children with auditory processing disorder, and children with difficulty with emotional regulation.

Several parents have reported that their child is calmer and more relaxed. One 10 year old was very happy and singing lots after each 30 minutes of listening. His mother also said he had less emotional outbursts.

One adult in her fifties reported that she found her emotions were more in control and she felt more relaxed both during the 40 days of listening and in the weeks following.