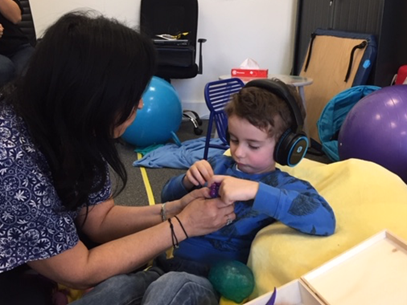 Kara Tavolacci, a SIPT (Sensory Integration and Sensory Integration & Praxis Test) certified Occupational Therapist, shares her experience with Camille whom she met in a Movement and Communication Camp in 2018 and his remarkable improvement in endurance, motor skills, and communication after using the Soundsory Program.

Camille was born five weeks premature via vaginal delivery.  He was overall a happy but quiet baby. Camille’s mom reports that it took him a few weeks to develop a strong suck, and would spit up frequently.  He has had his Adenoids removed, a hearing check in 2016 which was normal and he had previously taken many antibiotics for the treatment of asthma. Camille’s mom has also done homeopathy to help him detoxify previous vaccines.

Camille is currently in school with a shadow who helps him daily during his school day.  She will redirect him back to task when necessary, provide breaks, and modify curriculum as needed.  She has also been facilitating social interactions amongst his peers. Camille has received one hour/day ABA with his educators and as often as possible by mom and dad.  He also has received psychomotricity one hour per week and is currently receiving Occupational therapy with Floortime and Sensory Integration for one hour per week.

Mom reports on our case history in the areas of vestibular functioning and motor coordination that he often appears weaker than peers.  He seems at times clumsy and accident-prone, bumping into things. She also observed poor posture and that he seems to use extraneous movements during physical activity.  He always uses his right, demonstrates poor sports skills, has trouble catching balls of different sizes and lacks adequate protective reactions. He can tend to look slightly awkward or clumsy while moving compared to peers.  Camille will avoid balance activities and sometimes shows sensitivity to movement, getting motion sick easily. He has poor balance, indicates fear of activities requiring balance and seems to have poor balance with everyday tasks.

In October of 2018, Camille attended a movement and communication group.  I was the Occupational Therapist in the group, and there was one Speech Therapist with four students attending the camp, Monday-Friday, for 2 hours per day.  While attending the group he was joined by his aide who provided support and encouragement as well as opportunities for breaks when needed and help during social opportunities.

My Observations: Camille was initially overwhelmed by the group and gym space.  He sought out small areas and corners that provided him a sense of protection from the unexpected and newness of the group.  Camille was often quiet during the group, would repeat words when prompted and would protest when he did not like something. He often preferred to do his own thing; however, with guidance and support would join the group activities.  Movement activities were a challenge for him. He initially needed maximum support to attempt such an activity. If movement was too fast or unexpected or appeared scary for Camille, he would have a startle response, appear fearful, and avoid the task or challenge altogether.  His aid was able to facilitate his attempts at trying each activity at least once. Once participating in our hammock swing activity he demonstrated increased eye contact, engagement, and more straightforward attempts at repeating language. Having a countdown for activities significantly helped reduce his anxiety as he knew when an activity was starting and ending. Language was often minimal and required a prompt or visual cue from his aid. Camille also participated in the food exploration portion of the camp with minimal resistance. He joined peers at the table with some prompting and then sat independently with his peers.

Camille’s mom reached out a few months after the camp to see if Camille could participate in weekly Occupational Therapy sessions with Floortime and Sensory Integration strategies and tools with me in the gym.  Therapy began at the end of January 2019.

Camille is a very sweet young boy, often on the quiet side, however with a prompt or visual cue, he will attempt to repeat a word or words. When repeating words they were at times quickly said, unclear, and seemed to be just parroted back with little emphasis behind them.  There was little initiation of interaction or engagement. Camille would follow along when I presented activities however lacked the ability to initiate. He would often seek out small areas and a familiar toy animal box that was in the gym. Movement activities were often avoided or with prompting attempted once, and then he would retreat into his own world.

He presented low muscle tone and endurance, would often “W” sit in the gym or lean on cushions and pillows.  Camille preferred to be sedentary and on the ground. It took maximal encouragement and coaxing to get him to sustain interest in an activity and even then, it was for one to two turns.  Camille was also often fearful of movement and any type of movement that challenged his postural and core stability. When moved suddenly or attempting swings that challenged this he often would “W” sit, or lie down to get a more secure base of support.

Overall, Camille preferred more solitary activities, choosing his own activities, and staying solidly on the ground.

Because of his motor profile, low muscle tone, poor posture, “W” sitting, avoidance of motor tasks, poor gross and fine motor coordination, I decided that Soundsory could be an excellent tool to address Camille’s motor issues. We began by using Soundsory in our sessions to help Camille get acclimated to the headset and program.  Initially it required a lot of coaxing and reinforcement to keep the headphones on consistently. Once he was accepting the headphones within the clinic I proposed the Soundsory program to his mom and aid, who willingly agreed to try the program.  They were instructed to listen to all the first days in the program, 1.1, 2.1, 3.1 and so on. The program has an exercise portion to that I felt was too advanced for Camille and was worried that he would fight the whole program so decided that the main focus would be on just having Camille keep the headphones on while at home or school and listen to the music for the desired amount of time.

Soundsory was sent home with the family during the April 2019 school vacation. Camille’s mom felt that it was a good time to introduce the program as there was much more flexibility within the day.

CAMILLE’S JOURNEY AFTER THE SOUNDSORY PROGRAM:

After listening to the program for around two weeks, Camille returned to the gym for his weekly Occupational Therapy sessions with me.  I noticed huge improvements in his endurance and sustained engagement with motor tasks. The activity we chose was one that Camille had tried previously.  He was asked to climb up and sit on a bolster swing. The swing was relatively high, so he needed some help to climb up on the bolster swing. Prior to Soundsory he would attempt this maybe once or twice if we were lucky, and now after these two weeks of listening Camille had more energy, stayed with this game for around 8-10 times before moving on to another activity. It was incredible!! Less effort from my side was needed as he was easily engaged with this activity. He wanted to climb up and crash into the giant pillow pile.  He was also better able to shift his attention between his preferred animal games and engaging with me. His motor planning appeared improved as he attempted more challenging moves such as climbing between swings. There was more spontaneous language within our games, still requiring high affect but much easier to illicit and more consistent.

After two more weeks of listening, Camille continued to show improved endurance and participation in activities. There was a significant increase in his awareness of his body and that of others. He was trying to explore and put his belly on different surfaces.  It was like this awareness that he had a body woke up within him. And the most AMAZING thing was that he was initiating interaction and playfully teasing me. He would come up to me and seek out interaction when previously I had to bring the interaction to him. Throughout session we heard so much more spontaneous language and we heard his voice all the time.  He was so much more vocal! A response that I was not expecting to change as dramatically as it did.

I continued to see Camille as he finished his program and after completing it, he continues to hold the changes he has made. His motor coordination and engagement is improved, he continues to use language more spontaneously and clearly.  Camille’s aid said that the transition back to school this past September went smoothly, and since he has had this great jump in motor and language she is able to more easily facilitate peer interactions.  There are a few classmates that love playing with Camille on the playground as he is more available to interact, engage and follow along with what the others are doing.

We are ready to start our second round of Soundsory, and I cannot wait for more changes and development to occur!!!

Thank you for listening to Camille’s story,