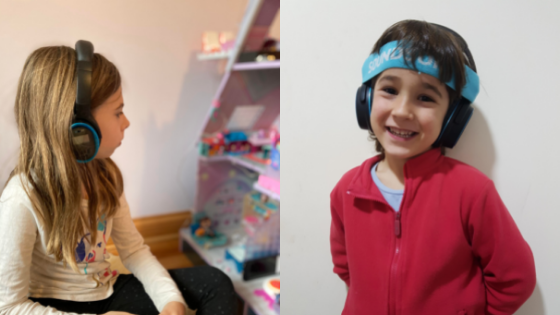 Soundsory has helped our community maneuver through 2020 and an overwhelming number of parents and therapists wrote to us with their feedback and experiences working with Soundsory throughout the year.

Joanna first came across Soundsory on Facebook and decided to purchase the headphones for her daughter who often struggled with learning.

She says, “I researched on the Internet and came to the conclusion that movement, rhythm and timing are very important for the development of the human brain. My daughter had difficulty with all three. At seven years old, she could not clap to a beat or even count things while pointing to them with a one to one correspondence. Therapy was difficult as she refused to do much during therapy or at home. Soundsory was a life changer!

It was easy to implement and she liked to draw or play dolls while she listened. I always stayed with her as she wanted company and it was our special time together. The first time she did the program, I just had her listen and skipped the exercises.

By the fifth day of the program, she was doing jumping jacks and marching spontaneously. She was so proud of herself as she cried remembering not being able to March in gym class at school and keep up with other kids. Another growth that I noticed was that she was finally able to count objects and get the right answer. By the end of 40 days, she was able to count to 100 by 1s, 10s and 5s. We took a three-month break over the summer and during the break, I noticed lots of improvement in her timing. She was trying to do dance moves while watching music videos for kids.

We are doing the second round now and this time she is able to do all the exercises with no refusals. It’s amazing to see the progress. She learned cross crawls and I sometimes catch her practicing on her own. Her math skills are improving so much. Nowadays, she likes to do the program on her own while playing legos. So far, Soundsory has been the best therapy we have done with the most astounding results. Over the years she did a speech, occupational and vision therapy but none of those brought big gains like Soundsory as my daughter had difficulty with participation.

Thank you so much Soundsory! We are looking forward to using Forbrain after we finish this round of Soundsory!"

Lidia, after being recommended Soundsory by her optometrist, used the Soundsory program with her son.

Lidia’s son had struggled with balance and coordination since he was a kid. He suffered from severe otitis (series of ear infections) as a baby which further worsened his language development and coordination.

The Soundsory headphones not only improved his coordination and listening skills but also led to positive changes in his behavior and attitude. The rhythmic music and exercise sections of the Soundsory program progressively improved his balance and overall rhythm. She adds, “We used it for 40 days, for 30 minutes a day, and the result was very encouraging. It is also a tool that we can always turn to again since there is no time or age limit. I would highly recommend it!"