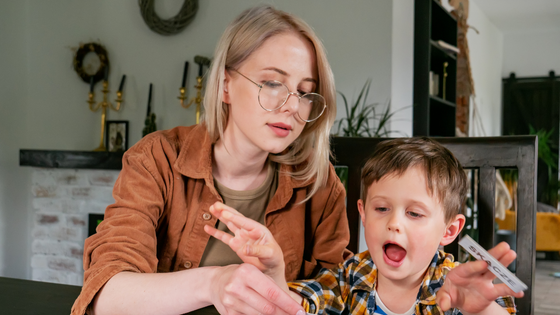 Julia's son Alex is 6 years old and has been diagnosed with non-verbal  Autism Spectrum Disorder (ASD) with severe birth trauma. His therapist Jennifer decided to start him on the Soundsory music and movement therapy program. Here is Julia speaking on their Soundsory program experience in her own words.

“We just finished day 7 of the Soundsory listening program today and Alex has had absolutely no problems with keeping his headphones on the whole time during each session. He seems to very much enjoy the music and puts the headphones on by himself.

I haven't introduced the exercises yet, I think I'll give him more time to get used to listening first. Also, I need at least a day off from work to have a proper look at the exercise program to come up with a plan on how to engage him in doing it. At the moment he just keeps doing whatever he wants while listening.

In regards to any changes, I have noticed a big progress in his understanding. He repeats more words, and he is definitely calmer, not running away from his parents, etc. He also started giving us his own feedback, e.g. he said “it's too hot" when I gave him a spoonful of food.

Overall, I can see positive changes in him and I get great reports from his school teachers as well."

Madie is 6 years old and has been diagnosed with global ASD. She gets distressed and triggered very easily.

She used to refuse to put on any therapy headphones and in April '22, Jennifer sent her a Soundsory unit. In early November she received some feedback with the child's direct therapist and she had the following to say.

“We are happy to announce that after many moons, we finally got Madie to love the Soundsory. In fact, she likes it so much that she wears it 4/5 times a day.

Here are some of her improvements –